Why Raise a Quit-Proof Kid? 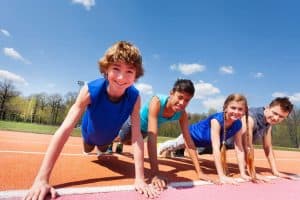 You may ask, why bother raising a quit-proof kid? Isn’t it okay to let my kid try a bunch of things and let them decide what they love? What’s the problem with my child hopping around between activities? And won’t they learn how to be responsible if I let them make these decisions?

The bigger question is, what happens when kids try something and quit before any they really learned or accomplished anything? Then, they try something else and quit. And then they do it all again with the next 'big thing'?

Let’s look into the future. Your child has been in and out of activities for a few years--starting and stopping when they are bored or tired or just don’t feel like it anymore.

Now your kid is in junior high. He really wants to try out for the soccer team. Or the cheerleading squad. Or the band. But your kid isn’t good at soccer. He quit after one season when he was 5 because he didn’t like it. Or she quit ballet at age 7 because she didn’t like the barre work. Or she stopped taking piano lessons to play T-ball and then quit that for swimming.

Your child has become a ‘jack of all trades and a master of none.’ Now what? The skills that would have developed didn’t have a chance and now your child complains that you never made them stick with something and they’re not good at anything. In fact, not only is this affecting their participation in extracurricular activities, it’s affecting their grades, their behavior at home and their friendships. When things get hard, they quit.

Your child is in high school now. There’s a project due and it must be turned in for a passing grade. But it’s tough. He doesn't like the teacher. He definitely doesn't like the subject. But it’s too late to drop the class and not turning the project in means he fails. He struggles with lasting friendships. He struggles with applying himself at home (to homework, chores and getting along with you and siblings). He's caught up in playing video games or snapchat but sticking with the more important things is tough.

Fast forward again. Your kid is an adult. He’s 18. He made it through high school. He struggled. Yes, he was smart but he never really learned what it takes to stick with anything longer than a semester. A semester seemed like an eternity. It took a lot of work to keep him going. Sometimes you had to sit with him for hours while he did his homework just to get him through it.

He got a job, but as soon as he didn’t like it, he quit. Then he got a new job but he didn’t like that after a few months, either. Now he’s talking about college but how will he manage that? It requires staying power to graduate. Can he do it?

Now he’s in a relationship. His relationships in high school were short-term. He seemed to move from one relationship to the next. The minute there was something he didn’t like, he quit. How will this one be any different? What would happen if he had a child? The pressure of having a baby is huge! Could he do it? Could he stick with the relationship AND raising a child?

So, why raise a quit-proof kid? Why teach your child how to stick with things when the going gets tough? When he doesn’t like all of the running? When she doesn’t like all of the stretching? When practicing gets routine? When he’s on the sidelines and not on the field? When it’s practicing the same move or piece for the 100th time? What’s the point?

The point is, any long-term commitment is going to have peaks, valleys and plateaus. Your kid will love the activity, dislike the activity and feel blah about it. Those feelings will last for short, medium and long times AND, they’re always changing. That is the very nature of everything in life with which we have a long-term relationship.

Our kids only learn how to manage and stick with long-term commitments from our example and WITH OUR HELP. They cannot learn this on their own. They don’t have the experience and they cannot somehow magically motivate themselves when they’re in a valley.

Our kids are very good at recognizing our weaknesses or indecisiveness, but they are not good at persevering when they face obstacles or their feelings change. They need an external, rock solid source of stability when they don’t have it in themselves. They need YOU.

Where It All Starts

So, you have a tiny child. Let’s say she’s 3 and you want her to go to a music and movement class because of all of the social and cognitive benefits. You enroll her. You attend with her. One day, she doesn’t want to go. You wonder if she’s sick. You take her temperature. You look at her closely and you decide to stay home.

The next class comes and she doesn’t want to go again but there is clearly nothing wrong. She was playing and happy until the moment you said you were going to class. This, my friend, is a pivotal moment. This is a little child who wants to have control. Don’t believe me? She’s not old enough to test you? She is. She’s waiting to see what you’ll do and who is in charge. Right this minute, she’s going to learn something about you. She's going to learn just how much power she has and how determined you are.

Two more years go by in the music and movement class. Now she’s almost 6 and she’s ready for piano lessons. You find a great studio and an amazing teacher. What’s different now is that playing the piano requires actually practicing at home. This teacher is experienced. She talks about how learning to play the piano requires a long term relationship that will have ups and downs. She tells you it will take YOUR commitment to keep your child in lessons.

You smile...you know that. You’ve taken The Raising Quit-Proof Kids Roadmap. You learned about choosing activities and outcomes. You're committed to her--not just trying piano, but sticking with it. You already know that she will not like it some days. That she’ll complain and cry and want to quit. But you know that this is a skill that you want her to master.

This is a great opportunity for you to teach her how to stick with things, even when she doesn’t want to. Life requires us to stick with things we don’t love doing….no one loves cleaning the kitchen night after night but the consequences of quitting aren’t pretty. But, having a clean, sanitary, easy to navigate kitchen is the result we’re looking for so we do it anyway.

Time goes by. Your child is in an activity and they’re sticking with it. You know that when he or she hits a valley, you have what it takes to keep them going. You’ve learned techniques for coping with tantrums and upsets. You know that giving your child space to work it out, to soothe themselves into a better place, works. It works not only for upsets about activities, but upsets about other things like homework and chores they don’t want to do. Tantrums decrease. Peacefulness is becoming more common.

Your child is making progress in their pursuits. They are learning skills and developing strong character qualities like diligence, determination and flexibility. They have earned their success and their self-confidence grows.

It’s time for junior high and they excel because they are reliable. They're learning how to manage some of those long-term commitments with you by their side to support them.

High school comes. They try out for that soccer team or the school play and they have confidence in their skills and abilities. They graduate and they’re off to college or a job. They know that they’ll have all of the experiences of peaks, valleys and plateaus but they’re ready for them and know there’s nothing wrong--it’s life.

Eventually, they might get married. They might have a child. And, because of you--yes, because you invested in teaching them how to be a quit-proof kid, they know how to raise their own.

If you ask me, that’s worth your investment.